I tested my comprehension while watching 15 minutes of a random Chinese soap opera in Mandarin using the methodology described in my Week 51 post. Although this year I have picked up the pace with my Mandarin viewing (and listening), I often wonder if I am making real progress. It was encouraging that the results—which are as objective as I can make them—suggest that my gains in comprehension are on track with my hours of listening.

I estimated that during the 15 minutes of the soap opera, approximately 1,453 words were spoken, of which I definitely understood 166, including repeats (such as “wo,” which means “I”). I believe this estimate is conservative, considering my self-test methodology. I feel confident in stating that I now understand about 11% of words spoken in Mandarin in the Singaporean soap opera Tale of Two Cities, and I expect this is representative of what I would understand in day-to-day standard Mandarin conversation.

This level of understanding, while far from true comprehension, is sufficient to allow me to understand more of what is happening in most situations than I would have a 14 months ago, before beginning to learn Mandarin.

I am at 26% of my experiment time, or 313 hours. As the following graph illustrates, I have been squeezing more and more Mandarin viewing time into my days, especially since mid-December (due to how much I enjoy my experiment). This trend may be slightly reversed, as I have started my Law classes again. On the other hand, incorporating music while driving into my experiment allows me to put in more time. 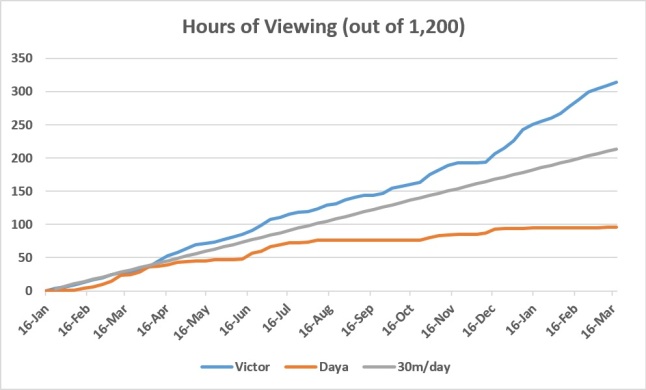 The graph seems to show my daughter teetering off and giving up on the experiment. Fortunately, that is not true. In fact, I believe she may have settled into a long-term participation in the experiment, in which she puts in about 1/4 of the hours that I do. She calls it “our experiment” (I melt inside) and we have tons of fun. Basically, she listens to music with me in the car, watches Boonie Bears with me some evenings, and every once in a while we watch part of a movie in Mandarin, usually a dubbed Disney film.

Her pace of acquisition is obviously far slower than mine (which is slow enough). There is absolutely no pressure on her, so she has fun and I think she is gaining a few things:

Getting back to my test, I’m very glad I did it because it has given me renewed confidence to stay the course. My results during the first few minutes were over 15%, but then gradually dropped down to 11.27%, which I rounded down to 11%. I think this drop may be due in part to simply getting lazier about jotting down words as the 15 minutes dragged on. This difficulty in jotting down words is one of the reasons I believe 11% is actually a conservative estimate.

I am hopeful that after another 47 hours of listening, having reached 360 hours or the 30%-mark of my experiment, I will score above 12%, keeping pace with the first 240 hours, which took me to 8% comprehension.

I know some of my readers are curious not only about how much Mandarin I’m understanding—which I’ve commented on regularly and which I’ve made a graph about—but also about what type of vocabulary I’m picking up and consolidating. Therefore, I will dedicate this short post to giving a sample of the words and expressions that I’ve learned.

First, a couple of clarifications. I’m not studying written Chinese, nor pinyin. So the way I write words might seem silly and is probably inconsistent. It’s just whatever comes to my head as a rough way to transcribe the sounds into an English type of spelling.

Second, writing posts is absolutely the only time I write down words. My experiment does not include making any kind of notes. I do this solely for the purposes of my blog, not as part of the learning process (and believe it has a negligible impact on my learning).

Another third point I should reemphasize is that, since my experiment does not allow me to get feedback or check my learning with people who actually speak Chinese, please do not specifically try to teach or correct me in the comments. You can certainly give me an overall opinion of whether I’m doing well or poorly, just not get into specific words. This lack of feedback also means I might be making serious mistakes, but that’s fine and is part of the whole experiment (and the natural learning process).

In watching The Emperor and the Assassin, I learned the word sha, which means kill. With that knowledge, it was easy to understand the full sentence (which I’m really happy about), Wo pu sha nee, since I already knew Wo (I or me or my), pu (no or a general negative) and nee (you). Therefore, this extremely useful phrase (because I can say it to anyone and it might help me in a pinch haha) means I will not kill you. The verb tense was clear from context, and it seems to indicate that verbs are not conjugated in Mandarin (or not always).

I learned many weeks ago that Nee shi shey? means Who are you?, which brings me to a very important word, shi, which is the verb to be. For example, Wo shi Victor would mean I am Victor, or simply Shi wo would mean It’s me.

As suggested above, the pronoun wo seems to serve as a subject pronoun (I), object pronoun (me), and possessive pronoun (my). That is also the case for nee. These are among the first words I learned and have had ample opportunity to confirm and consolidate. Recently, I believe I have learned my third personal pronoun, which is of great importance. I’m still not entirely sure about it, but I believe that ta means he, she, and it.

Dandanmeans wait. Dandan wo means wait for me.

The most used word in Mandarin, with the possible exception of the personal pronouns and shi, seems to be hao, the very first word I learned, and which can have many translations, but is always positive—good, okay, great, beautiful, etc.

I know few verbs, but one very important one I’m pretty confident in is ba, which means go. One of the places I picked this up was from the Frozen song Let it Go, or Sui ta ba in Mandarin, but this of course would not have been sufficient, since I watched this song with my daughter in several languages that I speak, and the specific meaning of the refrain often varies. For example, in Brazilian Portuguese it’s sung as Livre estou or I am free, while in continental Portuguese it’s sung as Já passou or It’s already passed. However, I’ve heard the word ba in various other contexts that appear to confirm that it means go.

Another very important verb is to know. I believe it is (or can be) chi in Mandarin, but I’m not sure yet. And I do know the verb ai (pronounced like “I”), which means love, so that Wo ai nee means I love you.

A very important recent acquisition is ka, which means look or see. I usually can pick this out when used in the form Nee ka, which means Look! (literally, you look or you see).

I know the numbers from 1 to 10, and believe I can continue counting to at least 19.

I know the words for mom and dad, mama and baba, while mother and father are something like muzenand fuzen—the z may be closer to an r.

Sheygua means fruit, and while I watched a Qiao-hu video that teaches the names of several fruit, the only one that stuck so far was Moogua, which means papaya.

Pigu means butt. If I repeat the Qiao-hu video enough times, I should learn several other body parts.

A more useful word is Shie-shie, which means Thanks, to which nee can also be added (Thank you).

I believe lai means here (or in some cases there). La is a suffix added to many words. Lai la seems to mean various things, such as Come here, I’m coming, or Let’s go. Similarly, a is often as a suffix, such that Shey-a? seems to mean Who is it?

Because this list is not exhaustive, and I’m sure there are many words I know pretty well that I am not remembering right now, I can confidently say I have a fairly well consolidated vocabulary of 50 or more words. However, there are many additional words that I am in the process of learning. That means I have heard and understood them in one or more contexts, but need to hear them several more times in other contexts in order to (1) be sure I have gotten the meaning and connotations right and (2) “memorize” them so that I can readily pick them out (and, theoretically, would be able to use them in speaking, although this is not particularly relevant now since my project is exclusively listening).

If you add these words, I would say my fledgling or tentative vocabulary is closer to 100 or 150 words.

Is this good for 70 hours of study (exclusively viewing authentic videos)? Taken on its own, I would say it is not so good. In 70 hours, using word lists, I would guess that I could have truly memorized perhaps 400 words. Hypothetically, I could at that point start to watch videos, but with a larger vocabulary than I have now, and also have simple conversations.

However, that’s a rather poor comparison. The three main points to make are that, first, without the contexts, those words may not have been committed to as long-term memory as the words I’m learning through movies and other videos. Second, I would run the risk of developing a mental translation habit, which can be pernicious and in the long run make it extremely difficult to develop real fluency. Third, my learning is far from limited to this consciously acquired vocabulary. It includes a growing familiarity with the phonetics, cadence, tonality, and even cultural aspects that are relevant to language acquisition.

In sum, I feel good about my vocabulary acquisition, but I don’t think it or any other indicator is enough, at this early stage, to either begin to confirm or refute my hypothesis. 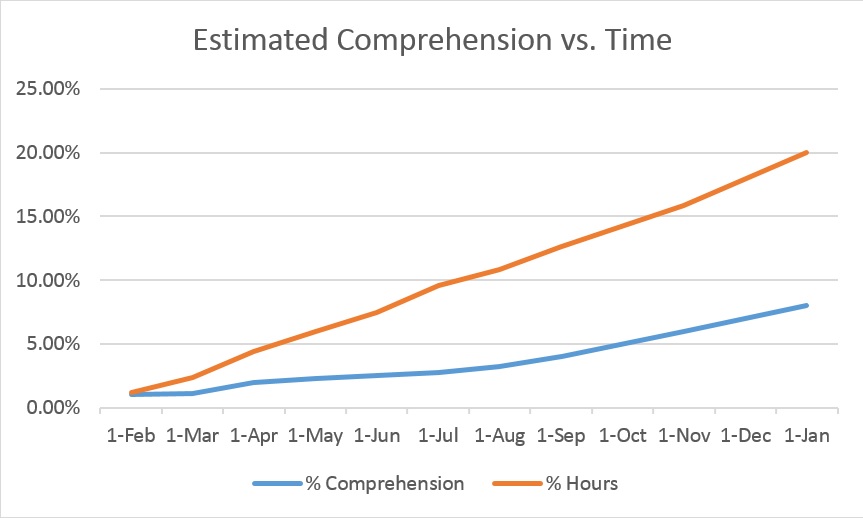